This title, which refers to a star or planet in the night sky, was a messianic term during inter-testamental times. It probably drew significance from a prophecy in Numbers 24. In 132 AD, when Simon ben Kosiba led a rebellion against the Romans, Rabbi Akiba gave the name Bar-Kokhba, “Son of the star,” to him because he believed Simon was the Messiah.

Christians know that by Simon’s time Jesus (Yeshua‘) had already fulfilled the prophecy; He is the true one. Two names of Jesus occur in the New Testament that include this name: the Bright morning star and the Morning star. 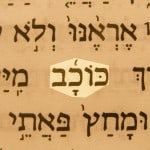 The Hebrew word kokhav meaning star in the text of Num. 24:17.

I see him, but not now;
I behold him, but not near;
A star shall come forth from Jacob,
A scepter shall rise from Israel,
And shall crush through the forehead of Moab,
And tear down all the sons of Sheth. (Numbers 24:17)