New Testament passages show how Jesus (Yeshua‘) fulfills Old Testament prophetic statements about the stone. People either consider Him precious and an honor to know, or they are shocked and offended by Him (1 Pet. 1:7, 2:7). To the latter group Jesus is a stone of stumbling.

Stone of Stumbling in Hebrew:

He shall be for a sanctuary; but for a stone of stumbling and for a rock of offence to both the houses of Israel, for a gin and for a snare to the inhabitants of Jerusalem. (Isaiah 8:14 KJV)

Other English versions translate the Hebrew differently: A stone to strike and a rock to stumble over (NASB) or a stone that causes people to stumble (NIV).

The Greek translation of the Hebrew verse is equivalent to the New Testament name, which is found in two verses that both quote Isaiah. 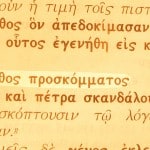 Stone of Stumbling in Greek:

This precious value, then, is for you who believe; but for those who disbelieve,
“The stone which the builders rejected,
This became the very cornerstone,”
and,
“A stone of stumbling and a rock of offense”;
for they stumble because they are disobedient to the word, and to this doom they were also appointed. (1 Peter 2:7-8)