The psalmist said “the LORD is my light,” speaking of Yahweh (Jehovah). Isaiah 60:1 suggested to later rabbis that one name of the Messiah was “Light.” Jesus spoke of Himself as the Light of the world but it was John, in the introduction to his gospel, who coined the phrase True Light. 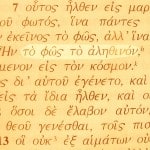 True Light, a name of Jesus in the Greek of John 1:9

That was the true Light, which lighteth every man that cometh into the world. (John 1:9 KJV)

Similar names of Jesus are Light of the World and Light of revelation but He is also likened to the Bright morning star.