The Jews knew God’s word (logos) was irresistible, irrevocable, and never returned void. They recognized it as another manifestation of His glory. They believed that the Word existed before anything else. This concept also applied to Wisdom, which Proverbs personifies as God’s assistant at creation. In his gospel introduction, John emphasized that the Word was one with the Creator: “all things came into being through Him.” He existed with God. In fact, “the Word was God.”

John understood the Greek perspective on logos too. Logos can also mean “mind” or “reason,” a fundamental principle that orders everything. John appealed to that idea but pointed beyond a dull principle of logic to a rational Being: Jesus (Yeshua‘), who is God incarnate.

In Jesus, John recognized an astounding truth: Jesus embodied and completed those two ancient and pervasive philosophical insights. He had universal—not just Jewish—significance. The pre-existing, life-giving Word of God was also the spine of order behind the universe, superior to the material world that He had initiated. He was “in the beginning,” and “the Word of God” was, in the end, the secret name that John saw written on our Lord.1 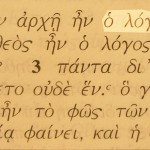